I became obsessed with the idea of serving in the Peace Corps at the age of 16. An RPCV came to speak at my high school and I remember thinking, yes! That. That is what I want to do. When you go to the website it states that volunteers are: “U.S. citizens 18 and older who are curious about the world and committed to helping others.” It sounds idyllic. Have a heart for travel and service? Have the luxury of being born in an English speaking country? Have an adventurous and open-minded spirit? Here’s a ready-made government program willing to offer you the opportunity of a lifetime.

A whole bunch of intrinsic qualities allow me to be here and to stay sane, but at the core of all that; privilege is why I’m here. Passion helped. Dedication matters. Persistence is essential. Education, mental, and emotional support is key. However, at the heart of it all, I am here because my immigrant father happened to meet my US citizen mother and they happened to have their children in the United States of America and I happen to have that little blue passport.

The Peace Corps is not inherently equal. We are not representatives of the whole. Beyond being US citizens and speaking English, each and every PCV has paid (sometimes nearly $1000 or more) to pass medical clearance. All of us graduated from some sort of higher education. None of us have legal records. We all went through some combination of: deferring payments, selling cars, sub-leasing homes or apartments, etc. We’ve all somehow financially “paused” our lives. All of us have had the capacity and support system to literally step out of our lives in the US to move abroad for 27 months. So yes, I love this job, even on the super annoying days, and the ability to do this work is such an honor…but mostly it’s a privilege.

I felt compelled to write about this because I can’t imagine if 16 year old me couldn’t realize her dreams because she’d had been born to an immigrant family that weren’t legal citizens. Or if I had a record because I had to go to extreme lengths to provide for my family. What if I didn’t have family and friends that could shoulder the burden of me leaving for 27 months? Circumstances of birth, timing, and opportunity could have completely changed the trajectory of my life. 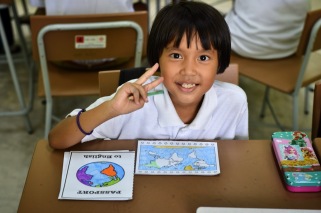 Last year, I wrote about how America needs to do better. The post came from a place of anger at how the current administration treats human life; specifically human life that doesn’t conform the cis-white-male ideal. Nearly 365 days have passed since that piece, and I re-read it tonight thinking about the abuse of power and privilege.

Here I am, sitting in my queen size bed next to the fan in my cute rental house graciously provided to me by the Royal Thai Government. Yet thousands of miles away, in the country I’m supposed to advocate for; the country I’m supposed to call home, our administration is plotting to build walls, forgo due process, and has (perhaps permanently) torn families apart. I’ve been so angry lately, at America, at our administration, at bigotry, at heartlessness; you name it and I’ve probably been angry at it. I haven’t known where to channel that anger. It reminded me of a Brené Brown quote from her live stream after the Charlottesville riots:

You need to be angry when you’re angry, but also remember that anger as an emotion is a great catalyst, but a terrible lifetime companion. Great catalyst. Be angry. But turn it into something else because just to live with anger serves no one.

So I’m writing in an effort to turn my anger into a catalyst. Let it be the catalyst for a world where 16 year olds with dreams can see them become a reality, even if they’re immigrants, LGBTQ+, poor, sick, or alone. Here’s a list of ways to fight against the current administration and the hate it’s spewing. Here’s to waking up each day to the belief in a future America that I don’t have to be ashamed of.

Recommendations from another article: