Let me know what I forgot, or what you’d add to your own list!

10) This is America Music Video by Childish Gambino

This video shook me to my core. If you haven’t seen it, brace yourself. It blew my mind and stands as one of the most memorable music videos I have ever seen. I spent days down the the think piece rabbit hole after this premiered.

Unfortunately, this wasn’t notable because it was rare, it was notable because of the way the surviving students demanded better from us as a country. The action they took, and continue to take, in the fight against gun violence held momentum unlike what I’ve seen in the past. Complacency seems to be the name of the game these days when it comes to guns, and it was refreshing to see that the next generation is demanding better. I’m keeping my eye on these kids as our American political landscape continues to morph in unpredictable ways.

8) The return of Lawrence on Insecure

I SCREAMED. This face is burned in my memory forever.

I don’t even like Lawrence and Issa together, but this moment was pure genius. In our current world of too-much-information-all-of-the-time, I get way too giddy about well kept Hollywood secrets. This wasn’t quite Beyoncé Lemonade level, but I was still shocked.

Two loud and proud Nigerian woman that literally make me laugh out loud. This podcast brought much needed laughter to my life throughout 2018. Even if you don’t know any Nigerians (which is shocking – they are literally everywhere!?) this podcast is well worth a listen. You’ve got a little religion, a little career advice, dating stories, and a few Nigerian insults thrown in for good measure. Go binge listen and let me know what you think you foolish goats.

Midterms are typically ignored by Americans. This year’s had the highest voter turnout (49.4%) in a century – since 1914 to be exact. Alas, the results were both exciting and underwhelming. Sure, we have some amazing women (123 to be exact) elected to Congress and we got diversity (at least on the Democratic side), but what it really showed me was that America is just growing increasingly divided. 2019 should prove to be another fascinating year in terms of the ridiculous content spewing from the current White House occupant, but I still don’t see the momentum needed to evict that occupant in 2020. Here’s hoping I get to be proven wrong…

This is a strange one to add to a memorable moments list, but honestly all of these were so shocking to me. We lost a lot of people in 2018 (good, bad, or otherwise; these people left legacies). Rest in Peace John McCain, Mac Miller, George HW Bush, Anthony Bourdain, Aretha Franklin, and Billy Graham. I’m sure I missed a few and I’ll leave the eulogizing of their legacies to the rest of the internet, but I know that I felt these deaths in very real ways this year. Particularly Mac Miller, whose music will always transport me right back to my college years in Pittsburgh.

Each of these deaths reminded me of Hamilton lyrics from two songs “The World was Wide Enough” and “Who Lives, Who Dies, Who Tells Your Story”.

“Legacy. What is a legacy?
It’s planting seeds in a garden you never get to see
I wrote some notes at the beginning of a song someone will sing for me
America, you great unfinished symphony”

This woman is my hero. She is smart, she is strong, she is black. She is everything. Here’s to Michelle Obama making 2018 a brighter and more thigh-tastic year. 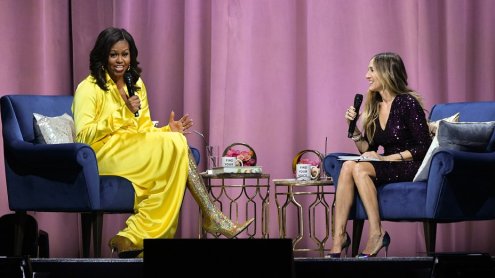 I read the version with a 15th anniversary afterword and I appreciate Anne’s willingness to admit that perhaps this story was not hers to tell. However, her depth of research and respect for all of the people involved in this story seems sincere and leads me to believe that she was maybe the only person capable of carrying out the monumental task of finding common threads between the various cultures and beliefs. This is an important and moving book dealing with cross cultural communication and just how different individuals can see the world. I loved it.

IT GOT ME HOOKED SO QUICK. This podcast was actually created in 2017, but I’m late to the party, but better late than never because OMG. The first season takes you through the Watergate scandal and the second season through the impeachment of Bill Clinton. It’s insightful, funny, fascinating, and engaging. I listened to both seasons in two days. It’s super binge-able and I look forward to seeing what Leon Neyfakh and his team come up with next in their new podcast, Fiasco.

1) “Dear Ijeawele, or a Feminist Manifesto in Fifteen Suggestions” and “The Thing Around Your Neck” both written by my other hero, Chimamanda Ngozie Adichie

“Dear Ijeawele, or a Feminist Manifesto in Fifteen Suggestions”: I have decided I will be buying and giving this book to every person I know that is having a child. And probably to some who aren’t. It’s concise, thought provoking, and accessible to those who already consider themselves feminist and to those whose do not. I cannot imagine a more valuable entry point to understanding how to be a woman, raise a woman, or be a male or female contributing member in creating a more equal world.

“The Thing Around Your Neck”: This is a collection of short stories that were each moving and eloquently written. Each story has its own unique style and tone, and each left me feeling emotionally drained. They are thought provoking, challenging, and unique. A true masterpiece and highlight of my 2018.

Brett Kavanaugh’s confirmation to the Supreme Court reminding us all that as of 2018, women still don’t get believed and cis-white-powerful men can get away with pretty much whatever they want.

Larry Nassar’s conviction and this band of invincible women.